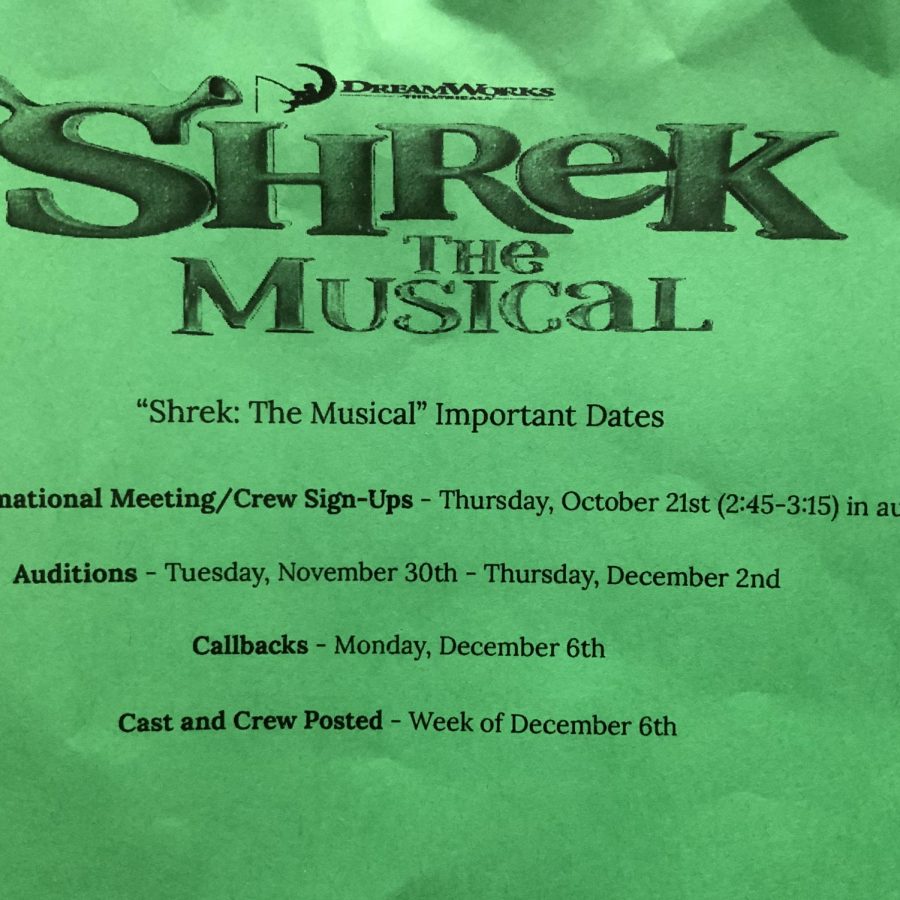 The paper Mayes handed out during the announcement.

Yesterday 40 or so students of all grades patiently awaited the reveal of this year’s musical. Since the hit production “Seussical”, the musical theater program has almost doubled in number, which explains the number of interested people in attendance.

According to students in choir, Mayes has been giving hints all month as to what the musical is. Sophomore Jacob Cameron says, “[Mayes] said it needs a big cast, the special effects and props and stuff cost a lot, [and] it needs younger and smaller people from the junior high. He [also] said it was school friendly, and that there is a murder in it.”

Based on the clues, a rumor went around that the musical would be Disney’s “Aladdin.” Students put together the murder to be Jafar at the end of the film, the extensive special effects to be the flying carpet, and the younger people to play Aladdin’s pet monkey and possibly the tiger. Most people were truly convinced that it was going to be “Aladdin,” this year, so much so that Sophomore Wyatt Hunt said “I’m going to say that I’m disappointed that it wasn’t Shrek.” before the reveal.

In a pre-reveal interview, Mayes shared that he and Scott Jones, the choreographer for Alder’s musicals and assistant director, have been waiting to do this musical for a long time. “When we decide a musical, all the pieces have to be in place. It just has to feel right and we always just go off of our gut instinct and that’s how we kind of decided. We decided this musical back actually during ‘My Fair Lady.’ We usually don’t decide a musical that quickly.”

At yesterday’s meeting, Scott called on senior Dominic Dellapina to open the envelope and show everyone the big news.

The crowd cheered, but was completely shocked. “It’s not, It’s not, I don’t think it is”, said Hunt.

Sophomore Mikayla Evans said that symphonic choir had guessed that this might be the show. “all week we’ve been going, ‘you need to do ‘Shrek’ sometime,’ and he’s been swearing up and down all week that it’s not ‘Shrek.’”

Senior Ellyse Tillyer is pleased with the directors’ choice. “I really like the musical,” she says, “and it’s honestly one of my favorites and it has some of my really dream parts. I would really like to be Princess Fiona.”

On the other hand, Sophomore Ana Ventresca has the opposite reaction. “I don’t like it because the movie’s better and I don’t like the musical. I’m just kind of disappointed and I knew it was going to happen.”

While Ventresca is disappointed, most students in attendance seemed excited and interested. The audition meeting for “Shrek the Musical” will be on October 21st,  auditions on November 30th, and the cast and crew list will be announced sometime during the week of December 6th.