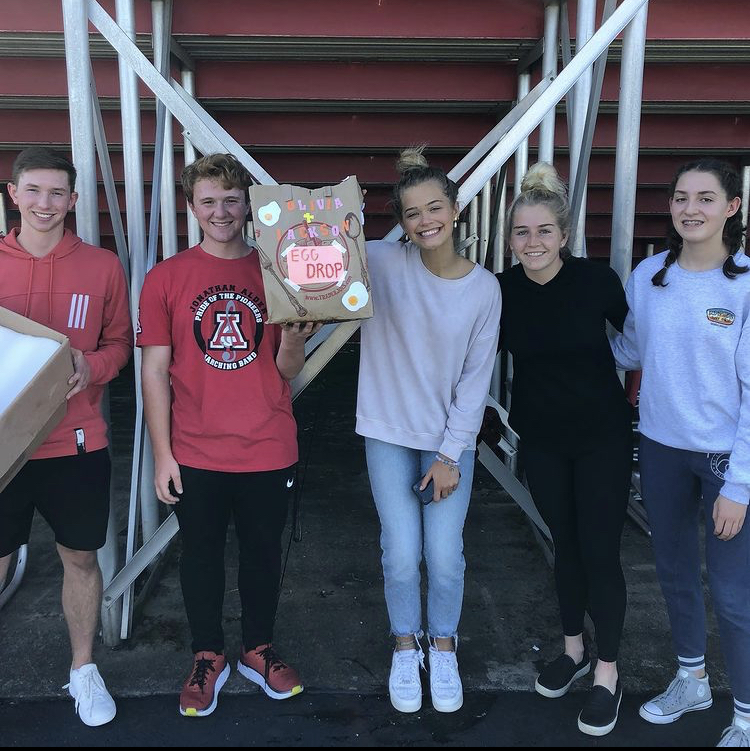 Walking the hall of Jonathan Alder after school hours, you can hear laughter and bonding among students and teachers. Clubs create new ways to engage students as well as help broaden their social circle. They create a sense of community and togetherness, uniting many of the students with common interests.

The clubs here at JAHS are involved in many fun activities held throughout the year. Not only for the school, but for the community as well. They have provided help with Daily Needs Assistance, created ravishing art pieces, and helped students learn masses of trivia. Along with helping others understand the language and culture of other countries, students can also help the school with fun events. Among the clubs we have, Assistant Principal Mrs. McCray says, “We hope to add a few more (clubs) this year.”

One of the clubs here at JAHS is the Art Club. This club focuses on having fun while learning new things and allows new members throughout the year.  The leader, art teacher Mrs. Moore, says, “Art Club is open to anyone who enjoys learning and creating things in a non-judgmental environment.” Art Club has created numbers of projects such as school murals, leatherwork, stain-glass,  mosaics, and many others. There is a $5 fee to be able to create these projects. Their first meeting was on September 9th in room 123. If you would like to be a part of the club, it’s not too late. Email [email protected] to be added to the Canvas course.

There are two language clubs at JAHS, and both clubs are open to new members throughout the year. The French club, led by Mr. Glatz, promotes the French language and culture around the school and community. The French club goes on many trips and participates in activities, including adopting a Columbus Zoo animal and going to the Zoo lights, celebrating French holidays, and taking a trip to La Chatelaine, a local French restaurant. Their environment is fun and casual. They meet on the first Friday of every month and elected officers at their most recent meeting.

The Spanish Club met for the first time this year on September 24th. The club meets after school till 3:15, 1-2 times a month. Mrs. Dollinger, the club adviser, says the Spanish Club promotes the Spanish language and Hispanic culture by teaching others in the school and the community. They participate in activities such as making crafts, watching Spanish movies, going on field trips, and partaking in service projects.

Service projects are some of the favorite activities across all the JAHS clubs. Even though many of the clubs do participate in service projects, that isn’t their main focus. For LEO Club, that’s what they’re all about.

LEO Club, sponsored by the Plain City Lions Club, is a service-based club open to all grade levels at any time in the year, collaborating and planning projects to undertake. Some of their regular service projects include helping DNA, giving valentines for all students at the high school, and canned food drives. Some new projects this year, according to club advisor Mrs. Marling, include “adopting a highway (and) collecting plastic bags/material for a new bench.” They meet the second Monday of the month at 7:00 am in room 205, and interested members can email Mrs. Marling to be added to the club Canvas page.

Another club at JAHS who participates in helping the community is the National Honors Society. “We are a larger organization but one made up of students that are driven and want to be active members of our JA community,” Mrs. Schludecker, the club adviser, writes via email. They give back to the community by volunteering at DNA, and running canned food drives. They hope to have several fundraisers in the spring like Easter egg hunts and Powder Puff football. The club meets once a month with officer meetings and other events in between. Students eligible to apply will receive applications their junior year.

Both the National Honor Society and Leo Clubs provide help for the community. The Student Council arranges activities specifically for our school community “The student council works closely with administration to plan Homecoming events, spirit week, pep  rallies and other school-wide activities,” write Mrs. Lorenz, the club adviser, via email. They are also taking on two new activities this year, maintenance of the senior courtyard and the new Student Welcoming Committee. Student Council is centered around building school leaders, strengthening school pride and spirit among the students, and creating memorable and fun activities for the students. To join the student council, all grade levels send applications during the spring to be selected for next year’s team. This year’s student council is already underway and meetings will be held throughout the year as help is needed.

If volunteering isn’t your thing, there are many other clubs who have other focuses, like Quick Recall, the Fall play, Science club, and Math club.

Quick Recall is a club that competes against other schools in trivia topics such as English, history, science, math, music, sports, current events, and general knowledge. They play eight weekly matches that consist of three rounds, each 12 minutes long, and at the end of the season they have a 10 team tournament with the schools in their league. Students are given 5 seconds to answer questions on the given topic, and 12 seconds to answer a math question. All students are welcome to join at any point in the year. Dr. Lorson, the club advisor, says, “these are questions for all grade levels of students, and you get to know a great deal of trivia.” Due to COVID-19, they were forced to switch up how they do things and go all virtual, so all practices and matches will be over Zoom. Practices are on Tuesdays from 3:30pm to 4:15pm. Matches will begin in November and go through late January.

The Fall Play at JAHS creates wild live action plays creating a fun and safe environment for people of all grade levels to express themselves. Some plays they’ve done in the past are “A Midsummer’s Night Dream,” “Brothers Grimm Speculation,”and “Clue.” “This year’s play is ‘You Can’t Take it With You,’ and it’s about a recently engaged young couple who want to meet their in-laws. One family is snobby rich and the other is completely crazy, and coming together is total chaos,” says English teacher Mrs. Tinberg, the director of the Fall play. Normally practice lasts for 2 hours twice a week, then when opening night approaches, they switch to 3 hours a couple times a week. Auditions for the play were held at the end of September, and the cast list was posted via the @alder_theater Instagram.  One thing they are excited about is being able to perform for a live audience; due to COVID-19 they were unable to perform live last school year.

JAHS Math Club Is a space for people to relax and have fun while learning about math and other interesting topics. Math Club has created many cool and articulate projects such as making post it note structures, the mod game, and competing in an annual math contest. This contest is a statewide math contest sponsored by OTMC (Ohio Council of Teachers of Mathematics). Consisting on topics from Algebra to Pre Calc, Mr. Carpenter, club adviser, says “If a student scores high enough, they are invited to the next level of competition and could be eligible for a scholarship.” Along with the next level competition, the students will earn a plaque with their name on it. This contest isn’t a new implant to the Math club-JA has been a part of it for 16 years. Math Club meets once a month for 30 minutes to an hour, examining topics that most math classes don’t reach, and is open to any students interested to join throughout the year.

Science Club engages students from all grade levels in activities such as the naked egg drop contest, where students engineer a contraption so that a raw egg will not drop from different heights. They also take trips to COSI (Center of Science and Industry), and conduct experiments. Additionally partaking in hot chocolate socials, Christmas and Halloween parties. “Science club is laid back and welcomes everyone throughout the year regardless of what their schedule may look like,” says Mrs. Calland, the club adviser. This club meets every Friday afternoon.

A student at JAHS gives us insight on why she wanted to join the French club. “ I joined the French Club because it sounded fun based on the activities that they participate in, and I wanted to learn about French culture.”Meygan Brahler, a sophomore, says via Interview.   As the clubs at JAHS start to get into gear with their activities and meetings, they look to expand their numbers and find new ways to help the community and school. Creating a safe and fun environment for everyone interested in expanding their social skills, learning new things, or simply wanting to help others.