Media Only Cares when it Comes to Success

Backlash Olympians receive because of representing a different country instead of their home country. 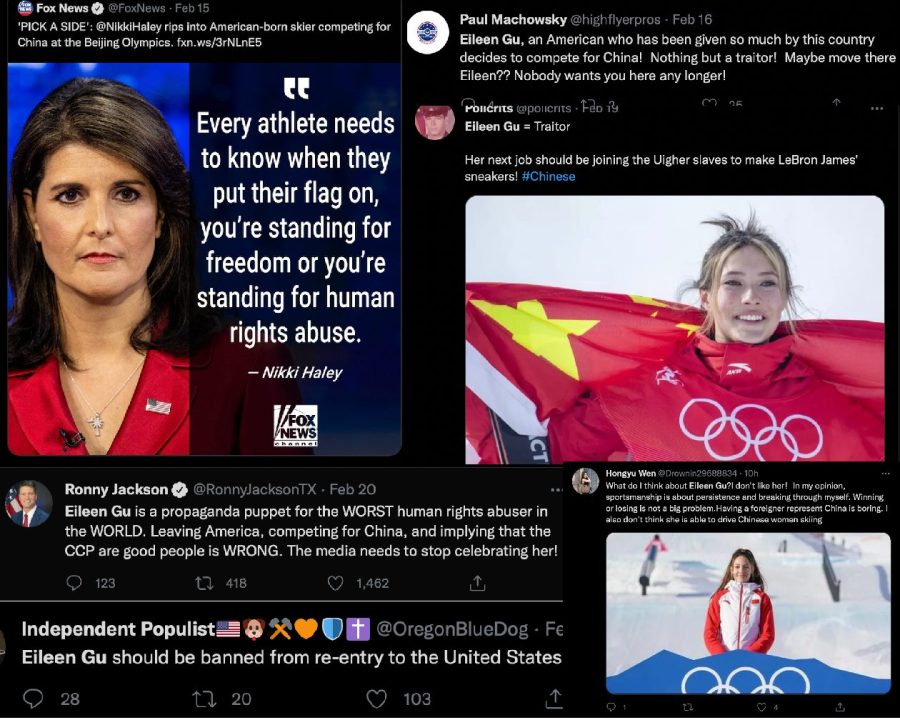 The Olympics are a time honored tradition rooted in national pride and global unity. Across the world, patrons sit down to watch athletes compete in the hardest athletic competition known to man. But with these games comes controversy surrounding the  athletes and, often, the countries that they represent.

According to The Olympic Committee, as long as the competitor is a registered citizen in multiple countries, they can decide which country to represent. With this by-law comes a lot of backlash. Although ironically, this backlash is coming mostly from the watchers of the games rather than competitors.

Chinese citizen Eileen Gu was born in America and decided back in 2019 to represent China for the 2022 Winter Olympics at Beijing. Some have been talking about how she’s only doing it for the money, social status in China and even bringing up her mom. Along with that the media has also been calling her a traitor to America and that she isn’t welcome back.  The media did not care then, so why is it now an issue?

Looking recently at what Gu has done in the games, she has become the first Freestyle Skier to win three medals: gold in Women’s Freeski Halfpipe and Women’s Freeski Big Air, as well as silver in Women’s Freeski Slopestyle. Having such a historic accomplishment, are Americans mad that they don’t get to say that Gu represented America and therefore don’t get the honor? Or is it that when thinking about someone of different nationalities can represent other countries at the games upsets Americans?

The funny thing is that it’s not just in America that this same backlash is coming from. Nathan Chen is the child of Chinese immigrant parents who moved to America, he is not a citizen of China. But Chinese people have been reacting to Chen in a very negative manner.

One user on Twitter said that Chen’s gold medal performance was “[the] acrobatics of a circus monkey,” others have claimed that he humiliated China by representing the U.S. More hateful comments can be found on Weibo, a microblogging website, one of the primary social media platforms in China.

Competing in his first Winter Olympics at Pyeongchang back in 2018, he placed fifth in the Men’s Singles and won the bronze medal in the Team Event. Since his debut in Pyeongchang he has been a renowned competitor for figure skating.

Chen had not received any backlash from China at the Pyeongchang games, so why is it being brought up now? My theory is it’s because he medaled, he showed off his skills and put his mind to winning;  leading to a gold medal  for the Men’s Singles and a silver medal  for the Team Event.

He is just now receiving this hatred from China because he chose not to represent them and won significant events at Beijing. Just like Gu and America, watchers of the games don’t care what countries the athletes compete for. They simply care about winning,  even though they aren’t even the ones competing; they’re sitting at home watching these five-star athletes, only to criticize them for what country they represent when they win.

Social media has been focused on Chen and Gu, but what about other competitors? Italian citizen, Louie Vito was born in Columbus Ohio; he decided that competing for Italy would mean he represents not only his family but his heritage.

Looking throughout the media, Vito has not received as much hatred as Gu and Chen. Twitter has shown love to Vito and his return to the games, even if he is representing Italy and not America. Tom Archdeacon wrote an article about Vito and the hype of him coming back to the games even though he isn’t competing for America, “he’s competing for Italy, which means he’s representing his family and his heritage.” Throughout the article Archdeacon talks about his success and everything that Vito has done for his community and how competing for Italy is him showing support for his family.

It seems to come back to the whole idea that people only care about athletes and teams when it comes to winning. Not when they lose or perform poorly, the media only cares about winning and success. Gu and Chen’s accomplishments have proven this point greatly. Throughout the Beijing games, many athletes competed for different countries, some received backlash and others didn’t. Those who received hatred seems to only be because they were successful throughout the games, whereas those who didn’t receive any negative attention from the media placed lower than their competitors. The Olympics are all about winning and having national pride; the media really highlights that idea in different forms, but it can mostly be seen when an athlete of multiple nationalities’ success is negatively received by the country they chose not to represent.