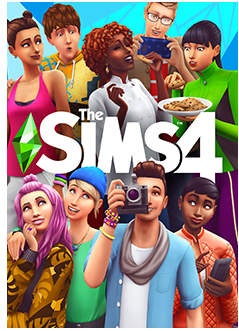 The Sims 4 released in 2014 as a sequel to Sims 3. Sims 4 is an online social simulation game where you create your own characters (Sims). The Sims 4 has many features that make it so enjoyable. You follow your Sim, as you will have to make some important choices for them. Some of those are going to college, getting married, having children, and much more. Sims 4 is available to play on PC, Mac, Xbox 1, and Playstation 4  similar to The Sims 3.

When you are playing, you start the game by making a new file, and making your Sim. After making your Sim and choosing where you want your Sim to live, you are greeted by a cheerful tune which means that the game has officially started. There are so many different things to do once your Sim enters the world. You can build your Sims skill level by reading books, cooking, listening to music, exercising, fishing, fixing appliances, having conversations with other Sims, and much more. This is an aspect of the game that I really enjoy because The Sims 3 series did not have as wide of a completion part. Although playing the game and building up your Sim’s skill levels is fun and all, it can get boring after a couple hours of playing. One feature of The Sims 4 that keeps me more interested than previous versions is the ability to add packs.

Packs are one feature of The Sims 4 that makes it better than The Sims 3. “Packs” are items that can be purchased in the game.They can unlock new makeup, furniture, locations, careers, jewelry, and outfits. Each pack has its own theme, and the various items in the pack match the theme. For example, the pack “spa day” includes various spa themed items that you can use in your builds. While the packs are an interesting and useful feature of the game, it’s hard to make specific builds if you don’t have packs available to you. For example, if you want to make a child’s room it would be difficult to get furniture that would fit the theme from the default items available. In comparison, if you had the parenthood pack you would have many options available to you for that specific purpose. Another downfall of the packs is that they cost money, ranging from $5 up to $50. Most of the packs that contain items that are useful in most builds do range in that $50 price. While there can be sales that can get you more bang for your buck, just think – is that pack full of useful items to incorporate in your builds really worth that $50? Although they can be expensive, packs add something different to this version.

The best part of The Sims 4 is the builds people have created and shared on the gallery. The gallery is a great way to get some inspiration for builds. Just turn on the cheats for unlimited money, pick a lot you want to build on, and start building. If you’re not much of a builder, go to the gallery and look at all of the builds others have made. From single mom and dad builds, college dorm builds, big family builds, island life builds, to even whole entire Sim worlds that people have redone. There is so much to look at and find inspiration in the gallery.

Whether you play The Sims 4 or not, there is no question that Sims 4 is the best game in the Sims series and has lots of amazing features. The Sims 4 can get boring after playing for a couple hours and the packs do cost money. There is no doubt that The Sims 4 offers a gallery full of amazing builds to look at and share.